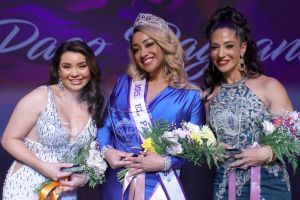 THE PAGEANT: This event is independantly produced and directed by Laura's Production LLC. It promises glamour, excitement, high level of competition, lots of appearances, and great prizes courtesy by Laura’s Productions LLC.

THE COMPETITION: The pageant will have three categories: casual wear, active wear and formal wear. There will be no swimsuit competition. 5 judges will base their decision on physical appearance, poise, posture and runway. The program is a great opportunity for ladies and men to experience pageantry, meet new friends, make appearances around town, learn how to walk the runway, and develop self-confidence and positive presentation skills.

Jessica Lyn Ashmore was born January 1, 1980 in Des Moines, IA and moved to Palmdale, CA in 1985. From an early age, Jessica knew she wanted to influence the world in a positive way. Jessica, while in high school adopted a famous quote from Mahatma Gandhi, “You must be the change you wish to see in the world.”

Jessica started pageants when she was only six years old. She was able to win Miss Dream Queen in 1987. After multiple pageants, she decided to move on to modeling and acting. Jessica attended and graduated from John Casablanca Modeling School in Los Angeles, CA in 1991.  During her modeling and acting careers, she was able to do various fashion shows and star in local plays.

After graduating from High School, Jessica had already enlisted in the Army National Guard. During her 13 years of service, she able to attend multiple schools and served in Operation Iraqi Freedom and Operation Enduring Freedom.  Her last assignment in 2009 brought her to Fort Bliss, TX, where she worked with Wounded Warriors at the Warrior Transition Battalion. Jessica is now a civilian employee with the Department of the Army and still working with the Wounded Warriors at the Soldier Recovery Unit. Jessica assist Soldiers with their Career and Education Readiness goals, prior to them medically transitioning out the Army.

Jessica Lyn Ashmore is a dedicated mother of two handsome sons. Her oldest recently graduated for El Paso Academy East, Class of 2021. Jessica is impassioned to work with Cancer Treatment and Children’s Crisis Centers.  She wants to advocate for children of abuse and domestic violence. Jessica is keen to serve the greater El Paso Community with her positiveness and to be the example the she adopted while in high school. “You must be the change you wish to see in the world.” By Mahatma Gandhi

Robert Seth Minjarez is a 22-year-old full time student at UTEP. He is working on a Mechanical Engineering degree. Robert also holds a part time job as a barber and aspires to start his own business. His mission is to show the youth that confidence is key and that anything is possible. Robert believes that being named Mr. El Paso is an honor and will work hard to be a positive example for others.